Conferences provide a multitude of opportunities for activities imperative to a research career, including presenting your research, learning about others' research, developing new ideas and collaborations, and networking with other scientists for career opportunities for yourself or your advisees. Such networking and research discussions help you when your papers and proposals for funding are being peer-reviewed, or you're being externally reviewed for a promotion, or you've been nominated for an award. In this blog post, I will discuss some of the highlights from the American Geophysical Union Fall Meeting that I attended during the first week of December.

Monday morning was my research poster. I described my current progress with several people, many of whom work with data from the same mission and instrument as I do. During my poster session, there was a highly anticipated press conference about the Mars Curiosity rover that I tried to watch some of via live stream on my iPad. There had been a lot of speculation about a big, groundbreaking announcement, but it was mostly initial results. I looked at a few other posters and went to a couple of talks. One interesting talk was on a substorm that occurred in 2010 that caused the Galaxy 15 satellite to stop responding to commands. They found that currents of 3 million Amps were driven in the magnetosphere during that substorm! Typical values are in the hundreds of thousands.

On Monday afternoon, I served as a panelist for a professional development workshop. It was hosted by the Association for Women in Science (AWIS) and the Earth Science Women's Network (ESWN) and was on Work-Life Effectiveness. I have presented this workshop, developed by AWIS, several times myself, sometimes with 2 co-presenters. However, the format of 2 presenters plus 3 panelists was nice because we were able to get a lot of discussion going and had a variety of experiences to draw from. I had several people approach me later during the conference to discuss work-life issues, so it was a great way to get my name and face noticed in a sea of over 20,000 scientists!

Monday also saw two additional events of interest: a press release from the Voyager mission as it is leaving the heliosphere and entering interstellar space (http://science.nasa.gov/science-news/science-at-nasa/2012/03dec_voyager1/) and another that NASA is already planning for another rover to go to Mars. There was a lot of discussion on the Twittersphere about this. Many planetary scientists were disappointed that the next planetary mission won't be going somewhere different, like Enceladus which is one of the best candidates for extraterrestrial life.

On Tuesday, there were a few sessions on dawn-dusk asymmetries in the magnetosphere. This is of interest to me because I study such an asymmetry in the ion temperatures and am part of a team that will be focusing on this topic through a grant from the International Space Sciences Institute. In the posters, I saw one on the cost of space weather effects on the power grid that she calculated to be $3-5 billion annually, and talked to another presenter about a possible collaboration.

In the evening, I attended a forum of people writing science blogs. After the forum, I attended the Space Physics and Aeronomy (SPA) section town hall. They discussed the results of the recent decadal survey, and the primary funding sources (National Science Foundation and NASA) discussed how they are planning to implement the suggestions from the decadal survey. After the town hall, I went to the SPA banquet. The banquet is another good networking opportunity.

On Wednesday morning, I gave my poster on using social media and blogging to teach science communication. I was next to a poster by the Scripps Institution of Oceanography about using art to teach about the oceans: 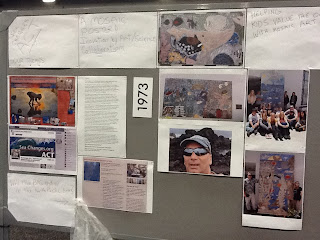 Another cool poster in my session was on the GLOBE program. They used a bunch of iPads in their poster. It took a lot of velcro tape to put them up: 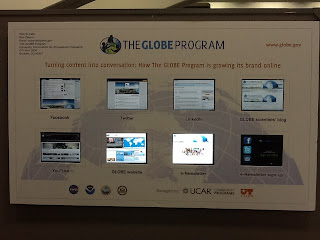 There were more presentations on Wednesday about dawn-dusk asymmetries. There was also a poster on a new technique to separate the oxygen and hydrogen in the data from instrument that I use, which I am now trying in my research.
On Thursday, I saw an interesting talk by Joe Borovsky. He claimed that the typical view that the product of the solar wind velocity and interplanetary magnetic field is the primary driver of magnetic reconnection where the solar wind comes in contact with the nose of Earth's magnetosphere is just a coincidence. Instead, he discussed that the solar wind ram pressure and density are the primary drivers, and that density can be rewritten in terms of magnetic field. Thus, the correlations that have been found between velocity times magnetic field are just coincidence. There were a number of talks on initial results from the recently launched Van Allen Probes mission (formerly known as Radiation Belt Storm Probes). One interesting result was the measurement of three belts during a certain period of time. This is the first time a third belt has ever been known to occur.
At lunchtime on Thursday, I attended the NASA Heliophysics town hall. They discussed much of the same information as they had at the SPA town hall on Tuesday, but in more detail. I did find out that there will be a solicitation of the education and public outreach program in 2013 that I can now plan to submit a proposal to.
Finally, I walked around the Expo, where companies demonstrate and sell their products. A lot of the products are instruments that geophysicists use to collect data, so not much is relevant to me. However, there is a large NASA booth with a lot of posters, stickers, etc. I got a calendar and took a picture with Camilla-the rubber chicken mascot of the Solar Dynamics Observatory (that has been in space!): 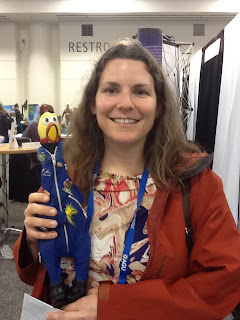 Posted by plasmaphysicsmom at 1:44 PM