My 5 year old has a peanut allergy. People often ask me whether he reacts to airborne peanuts as some do, and I always said no. We've been to football, baseball, and basketball games where people near us were eating peanuts and even tossing the shells nearby, and he never had a problem so I thought he wouldn't have that problem.
But I was wrong.
Last week we all went to Colorado while I attended a work-related meeting. We flew Southwest which serves peanuts on the flight, along with another snack. Of course, we didn't give Mitchell the peanuts, and he did find on the way out. But on the return flight, he started getting itchy legs soon after the peanuts were served. We looked for bug bites, then my husband realized that it was probably a reaction to the peanuts.
I had a small first aid kit that a couple of items with lidocaine, which we tried but didn't help much. We asked the flight attendant if they had hydrocortizone or benadryl, which they didn't. They seemed surprisingly unfazed when we said he had a peanut allergy. One mentioned that I could ask them ahead of the flight not to serve peanuts, but otherwise didn't seem at all prepared to deal with any sort of first aid or worse emergency. I'm not sure what would have happened if he had a more severe reaction. (I had 3 epi-pens which theoretically would give us 45 minutes to get him to an ER.)
A woman suggested an ice pack, so we used that and it helped a little. It was mostly his legs, but occasionally he rubbed his eyes and other places on his face, which made it a bit scarier. It was a very long 2 hours, and it didn't help that our younger kid was quite restless too.
My husband figured getting him off the plane as soon as possible would be best, so we asked a flight attendant if there was a way to get off quickly. She moved the two of them to seats at the front of the plane as we were getting ready to land so they could get off first. We landed after 11 pm so nothing was open in the airport.
After we got our bags, we stopped at a gas station and gave him two types of histamine blockers. Halfway home, we stopped at a WalMart to buy a pulse oximeter to monitor his heart rate and oxygen since he fell asleep in the car, occasionally scratching. When we got home, we gave him a bath to wash off any remaining peanut proteins, slathered him in hydrocortisone creame, and gave him some benadryl and steroids.
We continued to worry that he could still have a bad reaction and were afraid to go to sleep. We thought about monitoring occasionally with the pulse-ox, but one time his heart rate went up from what it had been. We tried calling our allergist, but he doesn't really do overnight call. I knew he would tell us to go to the ER, so we did (at about 3 AM).
The ER doctor was mostly concerned about the way the rash looked on his arms. Since we had been hiking in Colorado, there was some discussion of Rocky Mountain Spotted Fever. The typical MO for kids in the ER is to run every test possible to make sure nothing is missed. So he had a chest X-ray, he peed in a cup, and they wanted to put in an IV to get blood work and then have access for giving medicine later.
Yeah, putting an IV in a 5 year old who is already afraid of getting shots is interesting. The nurse was really nice and tried to make him calm by showing him everything she would be using and talking about everything. He was really brave as she put the needle in his arm, then kept asking when she was going to take it out. Unfortunately, the needle went through the vein, so then we had to tell him that he would have to do it over on the other arm. He bawled and said he wanted to go home.
My husband held him and said that we couldn't go home until we got his blood for the tests and finally convinced him to try again. Another nurse came in to do the needle this time. We were all around him, trying to calm him and take his mind off what was going on. This time it worked and he watched as they collected several tubes of blood. They taped and wrapped it up so he wouldn't mess with it. The nurse gave him a stuffed animal for being so brave and he went to sleep.
The labs trickled back. My husband and the doctor discussed that we could have him admitted if we wanted or could go home if the labs were all okay. So he decided to go home and take a shower while we waited for the rest of the labs, then come back and take a nap at the hospital until he started his 12 hour shift for the day. I sat on a chair next to my kid's bed and leaned forward to lay my head on the pillow next to him to try to sleep.
They gave him a dose of antibiotics through his IV and an oral dose of an antibiotic that fights the Rocky Mountain Spotted Fever. When the labs had all came back, the doctor gave me the choice of admission or going home, and we chose to go home.
My father in law had gone with us on the trip and was at home with my youngest kid and watched the kids after we got home so I could get a few hours of sleep. It's hard to recover from an all-nighter at this age!

While we're on this subject, I'll post an essay I wrote about the peanut allergy last year. I had submitted this to my favorite magazine, Brain, Child, which, unfortunately, is closing shop (and interestingly includes a debate about nut-free schools in the final issue that I received today), but they did not select to publish it. I wrote it after reading an essay in that magazine called "Sweet Somethings" about getting treats from the ice cream man. The same day I read that article, an ice cream truck came by. At the time, I hadn't checked to see whether there was anything peanut-safe to get, so I worried about taking my kid to the truck only to find we couldn't get anything. As he has gotten older, he understands his allergy and that there are limits on what he can eat. He generally asks if there are peanuts (although doesn't always understand possible contamination or when there's no label to check). And we have checked and eaten ice cream from the ice cream man! 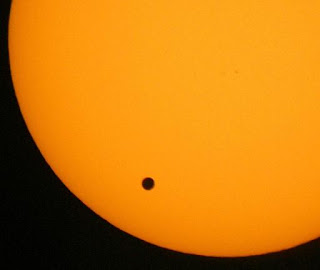 On Tuesday, June 5, 2012, the planet Venus will cross between the Earth and the Sun such that Venus can be seen as a small disk on the face of the Sun. A Venus transit occurred in 2004, but will not occur again until 2117. The Transit of Venus has been used historically to calculate the size of the solar system, and such work funded global expeditions, in particular by Cook. Planetary transits are also how the Kepler mission currently finds planets orbiting other starts. There is a wealth of information about the transit, past transits, and the Kepler mission being put out by NASA:
http://venustransit.nasa.gov/transitofvenus/
http://science.nasa.gov/science-news/science-at-nasa/2012/04jun_arcofvenus/
http://science.nasa.gov/science-news/science-at-nasa/2012/02jun_jamescook/

If you are near Morgantown, WV, the WVU Physics Department will be hosting a viewing and several stations to learn more. Solar Scopes will be set up on the patio along Willey Avenue for safe viewing of the transit. NASA’s live webcast will be shown. An iPad station for learning about the Sun and viewing data from the Solar Dynamics Observatory and STEREO missions will be available. There will also be videos about historical Venus transits and how they were used to determine the distance from the Earth to the Sun; and how the Kepler mission uses transits to find planets orbiting other stars. The Tomchin Observatory in Hodges Hall will be open for viewing the transit. Physics Department members will be available to answer questions and direct visitors to each activity. These events will occur from 6pm until sunset (about 8:30pm) when the transit will be viewable from our area.

If you are not near Morgantown, you can find out when the transit will be viewable in your area, search for viewing events near you, watch the live webcast from Hawaii, or learn how to make a safe solar viewer (do not look directly at the Sun!) at  http://venustransit.nasa.gov/transitofvenus/.