Most days, cooking dinner isn't very fun because it's an attempt to get something on the table quickly after getting home from work at 6 that is reasonably healthy (most days) and that the kids will eat. There are a few meals that we enjoy that fit this bill, but day in and day out, it can get old to try to come up with options for every single day. Also, when my husband, Sean, works the late shift, I really have no motivation to make a nice dinner.

But when there is a free day and Sean is going to be home, I enjoy cooking, especially when we can do it together. Since Sean was scheduled to work for half of Thanksgiving weekend this year, I invited my family to come celebrate at our house. This gave me a chance to cook several meals for a group of people, so I could make (and eat) some tasty meals. The challenge was that my mom and two brothers are now semi-vegetarian: they generally try to avoid meat, but will eat it in certain situations. They all said they were eating turkey, so I didn't have to worry about that meal (no tofurkey!). But for the other meals, I had to come up with something that could include meat or no-meat.

We're also a big pie family. I sent out a "pie poll" asking them to rank apple, pumpkin, and pecan pies. I was originally planning to make two. Well, everybody ranked them differently, with different top choices, so I decided to make all three.

Sean had to work through Friday, then had 4 days off starting Saturday, so I decided to do the turkey meal on Saturday. So that meant we couldn't count on turkey leftovers for the other meals. However, I also realized that I could make a pie each day and could easily eat all three pies.

My parents and younger brother arrived on Wednesday, which was also Mitchell's sixth birthday. For that meal I wanted something that he liked, so I made salmon, broccoli, and rice. I got a big salmon filet, seasoned it with salt, pepper, dill weed, and paprika. Then I placed lemon slices on top and baked it. I make frozen broccoli spears in chicken broth, and the kids like to put Molly McButter cheese sprinkles on it (they didn't eat broccoli until I introduced them to it). We still had some of the Lego cake left from his birthday party the previous Saturday, so we just used that to sing and do candles again.

To make the Lego cakes, I used two cake mixes and poured it into two bread pans and 12 cupcakes. I cut the tops off of the cupcakes and used the bottoms for the circles on each Lego. I just started making theme cakes this year. In the past I went low-key and just let the kids decorate their own cakes, which they enjoyed doing. But we always ended up with sections of cake overloaded with sprinkles and other decorations! My first theme cake was in July for Jason's third birthday that had monster trucks on it. 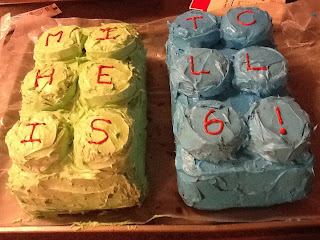 On Thursday, my older brother arrived to complete the family. Mom and I made an apple pie (we made three crusts, and refrigerated two). Ever since we got an apple machine, making apple pie is incredibly easy because I can outsource the manual labor to the kids. They love to do the apple machine, and fight over who gets to do it. The apple machine produces long strands of apple peels. My brother and the kids ate them like Lady and the Tramp ate spaghetti: We always make apple pie with a crumble topping (instead of a crust or lattice top) that makes it extra yummy! And it keeps me from having to do the difficult task of getting a crust on top of a pie.

For dinner on Thursday, I made lasagna. I used Barilla no-boil, home-style (no squigglies at the edges) noodles. I consulted two recipes (the one on the lasagna box and a Johnsonville sausage recipe on Allrecipes.com that included spinach) and augmented with extra ricotta, mozzarella, and sauce than either called for. I used (2 1/2 jars of) locally-produced Oliverio's spaghetti sauce and sweet Italian sausage and fresh spinach. To accommodate the semi-vegitarians and my kids who won't eat spinach, I made the left 3/4 with spinach mixed in the ricotta/egg/mozzarella mixture and the right half with the sausage. That way the semi-vegetarians could eat just spinach, my kids could eat just meat, and the rest of us could have both. It was delicious! We also had a tasty salad to go with it.

On Friday, Mom and I made the pumpkin and pecan pies. The recipe on the can of pumpkin didn't call for ginger, but Mom made sure we added it-a flavor that makes a pumpkin pie. The pecan pie was made from pecans ordered directly from a pecan farm (Delta Pecan Orchard) so they would be peanut-free. Most nuts are processed (shelled) on equipment that also processes peanuts, so there's no guarantee that there won't be some pieces of peanuts mixed in which can ruin your day if you or your kid has a peanut allergy. The pecans were nice, large, whole nuts-yummy!  My mom is very particular about the pecans and turns them all so the convex side is pointing up (she says it looks nicer that way).

For dinner, I had a big pork roast that I put in the slow cooker with some sliced onion and two Old El Paso reduced sodium taco packets. When it was done cooking, we pulled it and stuck it on the stove with its cooking juices and some vinegar (I left some out for the kids so it didn't get too spicy). I also heated a can of Bush's Seasoned black beans and a can of Cocina Latina refried black beans (with some other tasty stuff in it). We had tacos, and I figured the beans would make some non-meat options. I had Old El Paso Stand and Stuff taco shells and flour tortillas. For toppings we had shredded cheddar and quesadilla cheeses, chopped tomatoes, lettuce, avocado, black olives, and two types of salsa. There was corn on the side too. My older brother said tacos were his favorite food, so I chose well!

On Saturday, we had the turkey dinner and went totally traditional. I stuffed the bird with corn bread stuffing, and we also made  some out-of-the bird "stuffing" because that's the way my brother likes it. We had mashed potatoes, and Sean made the tastiest gravy. We had green beans, and cranberry sauce the way it should be: shaped like the can that it came in! 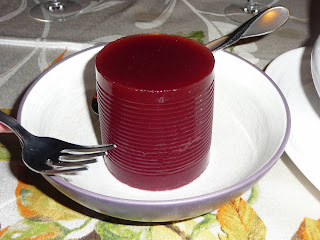 I am thankful for a great weekend with my family!!!