Today was my triathlon! It's a sprint distance-there are sprint, Olympic, Half-Ironman, and Ironman distances-although it definitely doesn't feel like a sprint to me! Lengths of sprint triathlons can be variable (especially the swim), but this one is 330 yard swim (in a pool that's strangely 33 yards), 11 mile bike, and 5K (3.1 miles) run. The bike and run are along a rail trade with very little grade. I've been doing this triathlon since its beginning, minus a few breaks for a trip to Australia, two babies, and last year when the trail was closed by a landslide. Today I had my best time ~1:18. Unfortunately they didn't have timing chips this year, I don't know why. But we didn't get splits (times for each leg of the race plus transitions), which was really annoying. Hopefully they'll post final times online so I know my exact total time. I only know from looking at the clock.

First is the swim. Since it's in a pool, 10 swimmers go in each heat, separated by 10 minutes. If you can't finish the swim in that time, they give you a time penalty. The water was a bit chilly when I got in. Sometimes I have psychological issues with breathing in really cold water, but I was able to calm myself down before starting and keep from freaking myself out during the swim. I shared a lane with a 19 year old that was way faster than me, but I had a pretty good swim. My time when I crossed the step where the timing pad usually is was 5:25.

In the first transition I put down my cap and goggles, put on my bike helmet, quickly dried my feet, and put on my socks and shoes. I don't use clip pedals on my bike, so this is the only shoe change I have to do. Pulling a bike off the rack is hard when it is squeezed with all of the other bikes and your arms are tired from swimming!

Next is the bike leg. This is where I wanted to try to improve my time. In the past I had never done much bike training. This year I went on several family rides, not really great training because it's pretty slow going to allow Mitchell and Sean pulling Jason in the trailer to keep up, but it's somewhat helpful for the muscles. Then I also did several morning rides around my neighborhood. These involved long, uphill climbs (followed by lots of downhill coasting) that really built my bike legs. I pushed pretty hard on the bike when I could. There were a few places that you couldn't push too hard-some bumpy places in the trail, some tight curves, and especially my encounter with a deer! A deer was standing to the right side of the trail, looking like it wanted to cross. I yelled at the deer to try to scare it away. It worked, but it couldn't find a place to turn back into the woods, so it ran along the side of the trail for several yards. We were coming to a bridge and I was so worried it was going to jump onto the trail, get trapped on the bridge, and totally freak out, but luckily it turned away from the trail just before the bridge. During the bike you can really get an idea of where you are in relation to other people in the race. Everybody has a number, so all the people in your heat have numbers in your decade. The person that had been in my swimming lane was the only person in my heat that was in front of me. I passed 2-3 people during the bike (one I wasn't sure if she was actually in the race) and was passed by none. When I got to the end of the bike leg, I checked the clock and saw that it was 46 minutes past my start time, so if my transition took about 5 minutes or less, then my bike split was 36 minutes-almost 10 minutes faster than my previous bike split!

The second transition is much faster without a shoe change. I just hung up my bike, a little easier since most of the bikers in my heat were still on the bike leg, except the person across from me who had annoyingly set their bike on a kickstand and the front tire was turned sideways, taking up a lot of space right in the way, then took off my helmet and put on my shirt with my race number attached. The shirt I could put on as I started to run out of the transition area, so that saved even more time.

Then the run. Let's just say that running hurts a lot after a long bike ride. The entire first half of the run was pretty miserable. The first half is on blacktop trail between buildings, and with the sun out, it was pretty hot. After a bit it crosses a street and then is next to a creek, which is a bit nicer, and then turns to crushed limestone through the woods, which is even nicer. But this direction has a bit of an uphill grade, so it hurts the whole way. After the turnaround, it feels awesome to have a bit of a downhill. It still was miserable on the sunny blacktop section, but so close to the end. As I came to the finish, my husband and two boys were there to cheer me on! I picked up the pace a bit to the finish. My run was about 32 minutes, which is a reasonable time for me (I usually try to run 10 minute miles during training). I was passed by a few people on the run, one was one of the bikers that I had passed that was from the heat before me, so I still may have beat her time.

Here's a picture from a previous triathlon (they didn't have a photographer this year either). This was on my old bike that I bought at a yard sale for $25. The first year I did the triathlon (while I was a grad student), I had used my old teenage-years bike that was terrible for a triathlon (big tires). On the way home from the triathlon, there was a big neighborhood yard sale. I saw this and bought it! A few years ago I got a new road bike for my birthday. 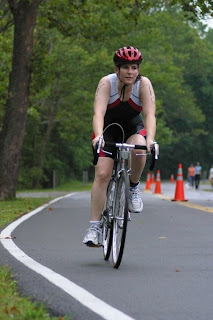 The fun thing about this race is that people are very nice-everybody says "good job" or other words of encouragement as they pass each other. Friends and co-workers have good competitions among each other. It's lots of fun (at least during parts of it, and definitely when you finish), motivates you to get exercise, and generally supports a good cause. This one supports Habitat for Humanity. I highly recommend checking out sprint triathlons in your area. If you're not up to all three sports, you can find two friends and do a relay.
Posted by plasmaphysicsmom at 2:41 PM 2 comments: